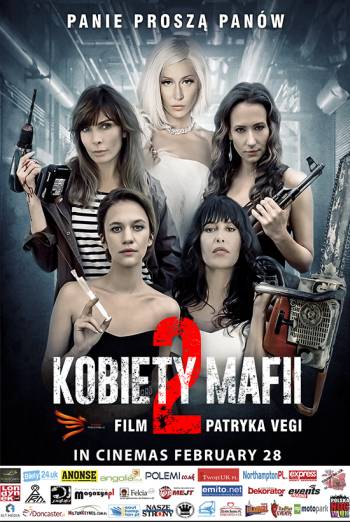 With Nanny and her gang now in control of Warsaw, they attempt the biggest and most daring drug smuggle Poland has ever seen. But reaching the top is easy compared to staying there… The sequel to the 2018 hit Kobiety Mafii, this Polish action film starring Agnieszka Dygant, Angie Cepeda and Katarzyna Warnke is adventurous, entertaining and thrilling.

Nanny (Agnieszka Dygant) and her gang have the run of Poland. Since taking control of the capital, the group of women have conducted several money-making schemes but things are slowing down. There’s only one way to make quick money – drugs.

After meeting the Colombian cartel and the dangerous Aida (Angie Cepeda), the Polish gang strike a deal to bring a ton of cocaine to Europe. It’s set to become the biggest drug smuggle in Poland’s history.

But when the goods arrive in the country, they suddenly disappear without a trace - the cartel suspects they’ve been double crossed and are demanding blood.

Ahead of a power battle with the cartel, Nanny will have to go to new lengths to keep control. If Nanny can pull this off, she will be notorious across the whole continent – but she faces danger, loss and greater challenges than ever before…

Get all times & tickets
IT'S ALWAYS CHEAPER ONLINE
You're in the right place. Tickets are always cheaper when you buy online at this venue.
All films at Dublin
Also showing

Not currently showing at Vue Dublin