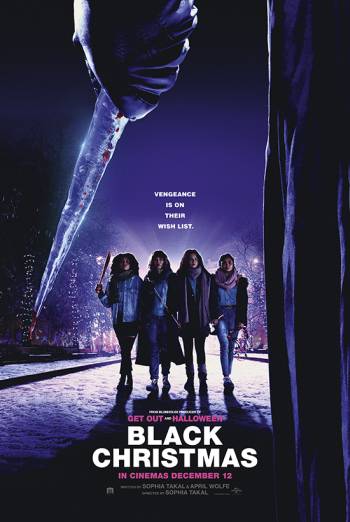 When a group of sorority sisters notice they’re being stalked by a savage and shadowy figure during the Christmas break, they must come together and fight back if they’re to make it through the festivities alive. Based on the 1974 film of the same name, this slasher-horror stars Imogen Poots, Cary Elwes and Brittany O’Grady.

Hosting a seasonal sorority party, the girls, with spirits high and the party in full swing, aren’t concerned when Helena decides to leave early – after all, it’s only a short walk home.

But nowhere is safe. There’s a terrifying stalker hunting down each of the sisters, and Helena is the first victim, dragged away, her blood soaking the snow.

As the body count quickly rises in the days after her disappearance, the girls grow suspicious that any number of their male college-mates could be responsible.

Co-produced by Jason Blum (Get Out, Happy Death Day 2U) and directed by Sophia Takal (Always Shine), this festive horror is a modern remake of the 1974 cult classic of the same name. Starring Imogen Poots (The Art of Self Defense, Green Room, 28 Weeks Later), Cary Elwes (Billionaire Boys Club, Stranger Things, Saw) and Brittany O’Grady (Above Suspicion, Star, The Messengers), Black Christmas will keep you gripped from start to finish.