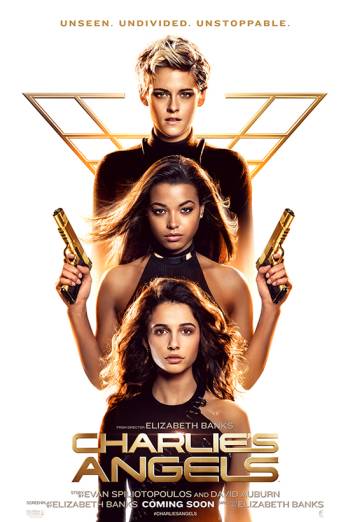 An all-female trio of international crime fighters, Charlie’s Angels, returns to the big screen on the orders of the ever-mysterious Charlie. Lead programmer Elena Houghlin teams up with Sabina Wilson and Jane Kano at the Townsend Agency as she tries to stop a revolutionary technology from getting into the wrong hands. Kristen Stewart, Naomi Scott, and Ella Balinska star in this reboot of the 2000 and 2003 Hollywood blockbusters and the 1970s TV series of the same name.

The international crime-fighting agency led by the mysterious Charlie makes a resounding return, which will see a new trio of tough women (Kristen Stewart, Naomi Scott, and Ella Balinska) standing against injustice.

Elena Houghlin’s (Naomi Scott) life and career as a lead programmer is thrown into chaos when she raises the alarm on a technology that could be weaponised. That’s when she finds herself in the Townsend Agency, working alongside spies Sabina Wilson (Kristen Stewart) and Jane Kano (Ella Balinska).

The trio of Angels have an extensive array of gadgets, costumes, and more at their disposal, with three Bosleys (Patrick Stewart, Djimon Hounsou, and Elizabeth Banks) guiding them along the way. Yet, can they get hold of the risky technology before the villains do?