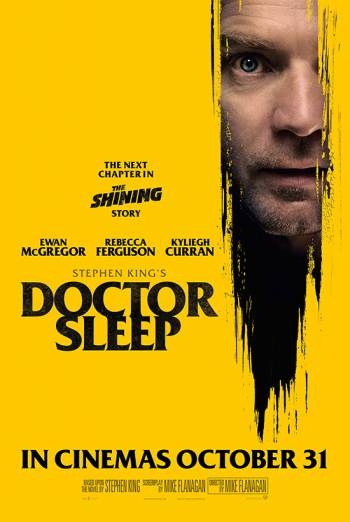 Years after the events at the Overlook Hotel, as told in The Shining, Dan Torrance remains traumatised by his childhood. But as a similarly gifted young girl comes to him, desperate to escape a sinister cult, he must face his own terrifying demons to save them both. Based on the Stephen King novel of the same name, Doctor Sleep stars Rebecca Ferguson, Kyliegh Curran, Jacob Tremblay and Ewan McGregor.

Following the horrifying events of The Shining, a grown-up Dan Torrance (Ewan McGregor) continues to struggle with his psychic abilities. Battling his inner demons, he has fought to find any kind of peace, desperate to escape his haunting past.

But when he meets the courageous Abra Stone (Kyliegh Curran), a teenage girl with her own similar ability, he is thrust back into the chaotic world.
Instinctively drawn to Dan’s powerful gift, Abra reveals her desperate plight against a merciless group that feeds from the ‘shine’ of their victims in a chilling hunt for immortality.

Discussing his own shining experiences, Dan explains he’s aware of the terrifying Rose the Hat (Rebecca Ferguson) and her deadly following, known as The True Knot. The cult members have identified Abra’s extrasensory ability and intend to drain her power to achieve eternal life.

As the pair begin to develop an incredible telepathic bond, though, they form an alliance. Preparing for a brutal battle with Rose and her dedicated followers, Dan must face the disturbing horrors of his haunted childhood if he’s to protect Abra from a dark fate.

This sequel to The Shining is brought to us by director Mike Flanagan (Gerald’s Game, Oculus), and is based on the 2013 novel of the same name by Stephen King. Rebecca Ferguson (Mission: Impossible – Fallout, The Greatest Showman), Kyliegh Curran (I Can I Will I Did), Jacob Tremblay (The Predator, Wonder), and Ewan McGregor (Christopher Robin, T2 Trainspotting), star in this intense horror that explores addiction and the haunting effects of childhood trauma.

Behind the scenes of the biggest new films