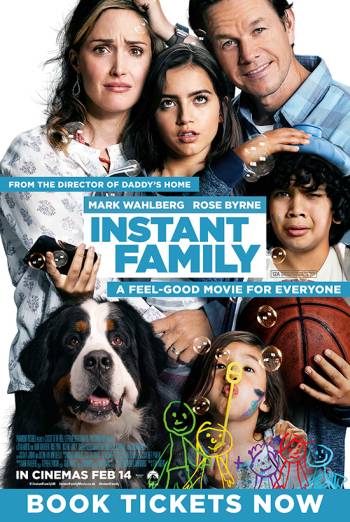 Ellie and Pete have never been the type of people that are great with children. And so nobody is more surprised than they are when they end up with three foster kids, and all the chaos that follows! A comedy about a couple who struggle to cope with the demands of an instant family, starring Rose Byrne (Bridesmaids) and Mark Wahlberg (Ted).

Ellie (Rose Byrne) and Pete (Mark Wahlberg) have a huge house, complete with five bedrooms and plenty of space – but they don’t have anyone to fill it.

They never got around to having kids of their own and aren’t exactly the most parentally-minded people… And so everyone is shocked when they announce they’ve decided to become foster parents.

However, nobody is more surprised than they are when they end up with not one, not two, but three kids.

After attending a fostering event where they meet Lizzy (Isabela Moner), a teenager with a bit of attitude, Ellie and Pete spontaneously decide to offer her a home, along with her younger brother Juan (Gustavo Quiroz) and little sister, Lita (Julianna Gamiz).

From empty house to full house, the couple is thrust into the world of packed lunches, cartoons, and sibling rivalries. To say they’re in over their heads would be a huge understatement.

Every day is a new challenge, as they find themselves trying to figure out how to heal broken toys, broken hearts, and (almost) broken noses. But through the blood, sweat, and (many) tears, the dysfunctional group begin to find a tempo.

As they navigate the ups and downs, Ellie and Pete begin to secretly hope that the unthinkable could happen – is it possible that they’ll stop being an instant family and become a real one?

Rose Byrne (Bridesmaids) and Mark Wahlberg (Ted) take up the lead roles, alongside Isabela Moner, who co-stars with Mark Wahlberg for a second time, having already worked together on Transformers: The Last Knight. Instant family is the work of Daddy’s Home director, Sean Anders, and is set to serve up plenty of laughs.