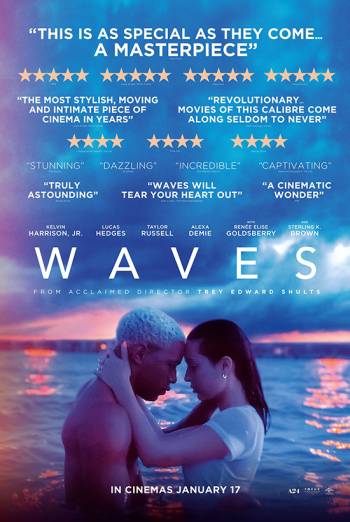 A moving portrait of a Florida family as they battle with the aftermath of a family tragedy. An emotionally charged American drama brought to us by Trey Edwards Shults and starring Kelvin Harrison Jr., Taylor Russell and Alexa Demie.

He’s a well-liked high-school senior destined for big things. He has a beautiful girlfriend named Alexis (Alexa Demie) that he loves dearly, but a demanding father who is constantly pressuring him to do better while Tyler’s younger sister, Emily (Taylor Russell), is constantly living in his shadow.

The siblings’ mother died when they were young, so they have been brought up by their father, Ronald (Sterling K. Brown), and stepmother, Catharine (Renée Elise Goldsberry).

When Tyler suffers from a debilitating shoulder injury that puts a stop to his potential wrestling career, his world begins to crumble. Matters become even more complicated when his girlfriend confronts him with a shocking revelation. Struggling to deal with his problems, Tyler becomes angry and his emotions start to spiral out of control.

A heart-wrenching drama about a family that navigates love, forgiveness and sorrow, brought to us by the masterminds behind Moonlight, Lady Bird and Ex Machina. Waves is the work of acclaimed director Trey Edwards Shults (It Comes at Night) and has received rave reviews. The film stars a collection of award-winning actors including Kelvin Harrison Jr. (Luce, Monsters and Men, Mudbound), Taylor Russell (Lost in Space, Escape Room, Before I Fall) and Alexa Demie (Mid90s, Brigsby Bear, Euphoria).