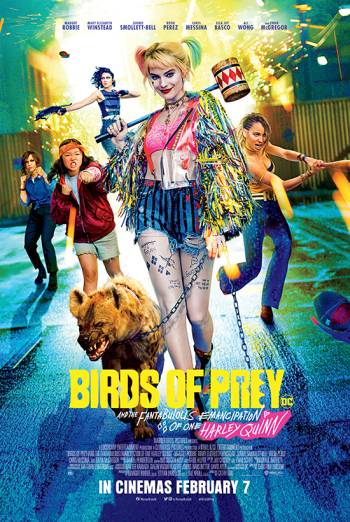 Join Gotham City’s top lady trickster, Harley Quinn, as she heads off on an explosive adventure alongside a group of fierce females out to rescue a young girl, and themselves, from terrifying crime lord Black Mask. Starring Margot Robbie, Mary Elizabeth Winstead and Jurnee Smollett-Bell, Cathy Yan directs this tale of Harley Quinn: Birds of Prey

Harley Quinn (Margot Robbie) has split up with the Joker and she’s ready for a new start. But as she works on changing her life, she quickly discovers there are a lot of people out to get her. Worst of all is crime lord Black Mask (Ewan McGregor), and she’s not the only woman in Gotham City that he’s pursuing.

Black Canary (Jurnee Smollett-Bell), Huntress (Mary Elizabeth Winstead) and Renee Montoya (Rosie Perez) have all found their way into his bad books. Now they’re teaming up with Harley to protect Cassandra Cain (Ella Jay Basco), a young girl who has managed to get her hands on Black Mask’s precious diamond.

For the troupe of superheroines to outsmart Black Mask, they must pull together. Can Harley and the Birds of Prey protect Cassandra and save themselves?

All films at Bromley
Also showing