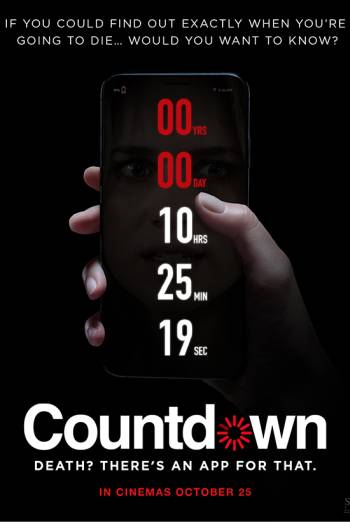 A young nurse makes a daunting discovery: she only has less than three days to live. But as she desperately battles to save her life, and those of the people she knows, she must also evade a mysterious figure… Anne Winters, Elizabeth Lail and Peter Facinelli star in this thrilling horror brought to us by Justin Dec.

When a young nurse, Quinn (Elizabeth Lail), hears that everyone is downloading an app that predicts exactly when a person is going to die, she gets it too. Interested in what it might say, and initially expecting nothing more than a few moments of short-lived entertainment, she doesn’t realise the grave error she has made.

The app is very real, and it uses much more than just playful guesswork to predict a user’s death day.

When the defenceless nurse makes the terrifying discovery that she has less than three days to live, she feels her chilling end begin to creep closer. Knowing her fate is closing in, Quinn frantically battles to find a way to survive and save the lives of people she knows. But with a haunting figure lurking close by, and other app users losing their lives when predicted, time really is running out…