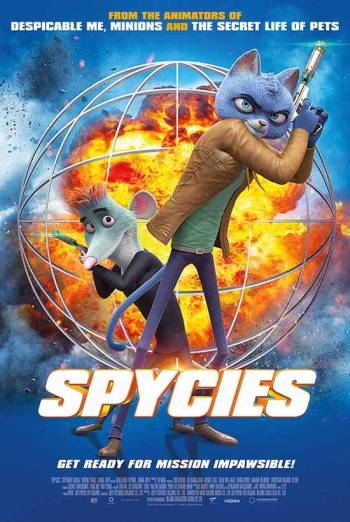 Two secret agents, Vladimir and Hector, must try and recover dangerous, top-secret material stolen by mysterious trespassers before their careers are ruined and the planet becomes extinct. This computer-animated family caper comes from the animators of Despicable Me and The Secret Life of Pets with voiceovers from Karen Strassman, Monsieur Poulpe and Davy Mourier.

Vladimir ‘Spycat’ is the Secret Service’s top agent. His attitude isn’t up to the same standard, however. As a reprimand for his poor conduct, he’s sent to a remote offshore platform to guard a top-secret material known as the Radiuzite. His only job is to prevent intruders and it’s imperative he abides by the rules; he’s on his last warning.

But, unfortunately for Vladimir, he is partnered with trainee agent Hector ‘Hacker Mouse’ who would rather play video games and watch soap operas all day than stick to the job at hand.

Before the pair have a chance to realise, a group of unknown burglars break into the platform and steal the top-secret cargo right under their noses. With their jobs at stake, the duo frantically embarks on an undercover mission to try and retrieve the stolen goods, save their reputation and rescue the planet from the threat of extinction.

Spycies is a family action-adventure where animals rule the world. Brought to us by the animators of Despicable Me and The Secret Life of Pets, the film boasts stunning visuals and portrays a powerful underlying message about the threat of climate change. The feature film is the work of acclaimed director Guillaume Ivernel (Dragon Hunters) and features voiceovers from Karen Strassman (The Onania Club), Monsieur Poulpe (Nerdz) and Davy Mourier (Nerdz).

Get all times & tickets
IT'S ALWAYS CHEAPER ONLINE
You're in the right place. Tickets are always cheaper when you buy online at this venue.
All films at Manchester
Also showing