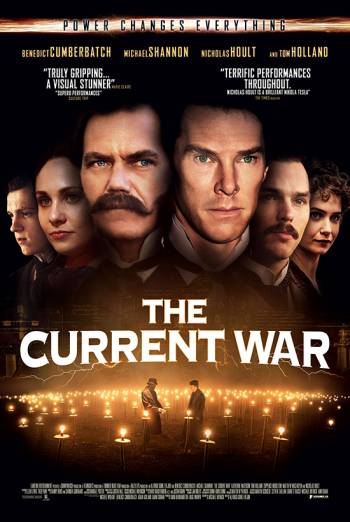 Trailblazers Nikola Tesla and George Westinghouse pit their wits against inventor Thomas Edison in one of history’s greatest rivalries, with a series of events determining whose electrical system will win the ‘war of the currents’. Academy Award nominees Benedict Cumberbatch and Michael Shannon star alongside Nicholas Hoult in this historical drama directed by Alfonso Gomez-Rejon.

The age of gas is over. In the late 18th century, inventor Thomas Edison (Benedict Cumberbatch) has come up with an electric system that will light up the world. Yet, his day in the sun could be cut short.

Businessman George Westinghouse (Michael Shannon) can see his investments in gas are no longer the way forward in the face of cheaper electricity, so he looks to see what this new technology offers. He teams up with inventor Nikola Tesla, who has come up with an alternating current, which is exactly what Westinghouse is searching for.

Edison, who is keen to stop this option from getting ahead, goes on the offensive and the truth quickly becomes a casualty in this war of wits. As Westinghouse’s and Edison’s electric companies fight it out for dominance, who will emerge victorious in the battle of the currents?

Alfonso Gomez-Rejon (Me and Earl and the Dying Girl) directs this period drama, starring Benedict Cumberbatch (Avengers: Endgame, Mowgli: Legend of the Jungle), Michael Shannon (Fahrenheit 451, The Shape of Water), and Nicholas Hoult (Tolkien, The Favourite), about the fierce rivalry between the two electric companies.

Get all times & tickets
IT'S ALWAYS CHEAPER ONLINE
You're in the right place. Tickets are always cheaper when you buy online at this venue.
All films at Manchester
Also showing