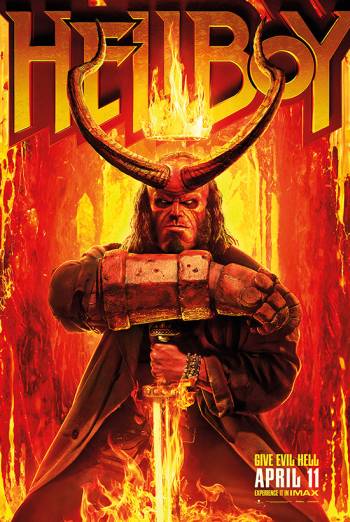 Hellboy must face off against the Blood Queen, a medieval sorceress whose one goal is to obliterate humankind. A brand-new reboot of the beloved franchise, Hellboy stars David Harbour, Milla Jovovich, and Ian McShane.

Promising to be darker than any other interpretation of the comic anti-hero, Hellboy is directed by Neil Marshall, who was responsible for 2005’s now classic horror The Descent.

Taking the title role of the powerful demon is David Harbour, who shot to international fame as Jim Hopper in Netflix hit Stranger Things. The actor has also featured in the acclaimed Revolutionary Road, along with Suicide Squad and A Walk Among the Tombs.

Hellboy’s main antagonist, Nimue, is played by Milla Jovovich, who is no stranger to cult classics having starred in the Resident Evil franchise from 2002 to 2016. The versatile actor has also provided her services to comedies such as Zoolander 2, as well as sci-fi horror The Fourth Kind.

Ian McShane finishes the leading cast as Trevor Bruttenholm, Hellboy’s adoptive father. This long-standing actor has featured across a huge range of highly acclaimed cinema and television, including John Wink: Chapter 2, Pirates of the Caribbean: On Stranger Tides, Game of Thrones and Deadwood.

Book tickets in advance to be the first to see one of the most hotly anticipated films of 2019, and come back for more details as we have them!