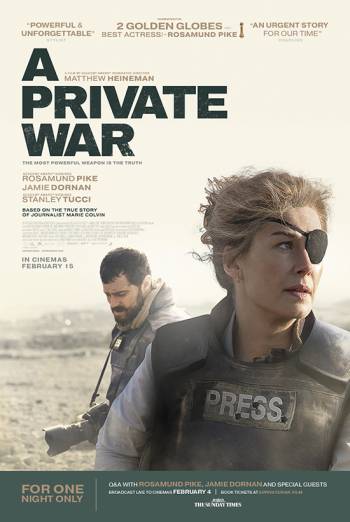 Celebrated war journalist Marie Colvin is constantly testing the limits between bravery and bravado, but her determination to experience the truth for herself could cost her dearly. Rosamund Pike, starring as the late great Marie Colvin, is joined by Tom Hollander and Jamie Dornan in this daring and moving biographical drama that’ll keep you on the edge of your seat.

In a world where journalism is under attack, Marie Colvin (Rosamund Pike) is fearless and determined in her convictions, desperate to unearth the truth in the deadliest warzones around the world.

After being caught up in grenade fire in Sri Lanka that renders her blind in one eye, things might be over for most reporters – but not for Marie.

Wounded and traumatised, Marie has experienced more war than most soldiers, but she refuses to give in and remains as driven as ever to reach the heart of conflict and tell the story of the real people affected. Her grit takes her to Syria with photographer Paul Conroy (Jamie Dornan), where she faces her worst conflict yet.

In an effort to expose the crippling real-life damage of the civil war, Marie goes deeper and further into danger than before, pushing the boundaries of the job – but at what cost?