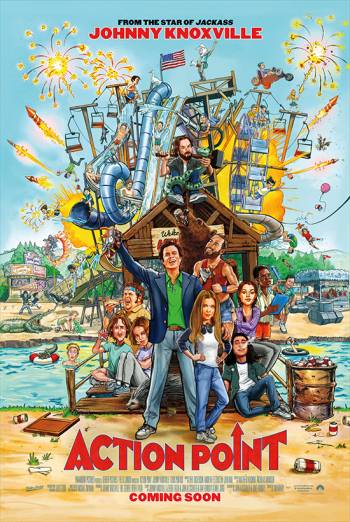 Johnny Knoxville is back to his old tricks in this hilarious comedy about a theme park with only one rule: have fun.

Action Point theme park isn’t exactly glamorous, but it promises to deliver a fun afternoon out – and, potentially, a few bruises. Safety isn’t exactly a priority for D.C. (Johnny Knoxville), the park’s wacky owner. He’d rather see people having as much fun as possible, even if it means there’s something of a health risk.

“Those days were different – there weren’t so many rules…”

When his teenage daughter (Eleanor Worthington-Cox) comes to stay, D.C. can’t wait to show her just how great it is to have a theme park as the family business.

However, his visions of a perfect father-daughter visit are shattered when a slick new mega-park opens and threatens the future of Action Point.

There’s only one thing left to do – D.C. and his team of misfit friends set out to transform the theme park into a wild destination that exceeds the expectations of even the craziest thrill-seekers.

From the familiar faces of Jackass and Bad Grandpa, Action Point is a rollicking ride full of hilarious antics and cringe-worthy consequences, sure to have you laughing long after the credits roll. As always, the notorious Johnny Knoxville doesn’t shy away from risky and ridiculous stunts, which promise to deliver plenty of side-splitting moments.