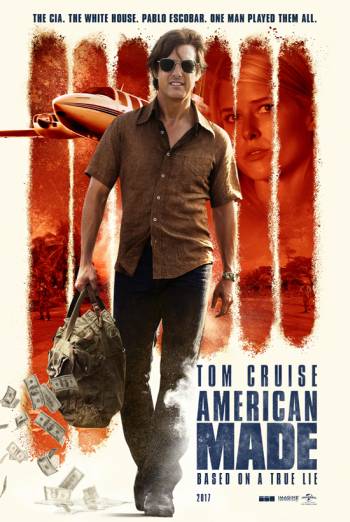 Following a series of historical events along the career path of Barry Seal, American Made sees this one-time good guy switch sides to smuggle drugs for the Medellín Cartel.

Barry Seal (Tom Cruise) was a former TWA pilot, flying commercial aeroplanes around the world, until the CIA recruited him to help deal with the emerging threat of Central American communism.

Going undercover on a covert operation to infiltrate the notorious Medellín Cartel of Colombia, the life and monetary benefits of a Colombian drug smuggler begins to entice Seal, as he switches allegiances in favour of a life of crime.

American Made follows the career of Barry Seal, and is based on historical events from the years of his life, swapping allegiances from the American CIA to one of the most famous cartels of recent times.

Seal himself is portrayed by Tom Cruise (Jack Reacher, Edge of Tomorrow) and is joined on screen by Domhnall Gleeson (Star Wars: The Force Awakens, The Revenant) and Sarah Wright (Parks and Recreation).

Doug Liman (Mr & Mrs Smith) directs this biographical criminal drama-thriller, having not worked on a film released by Universal Pictures since The Bourne Identity back in 2002.