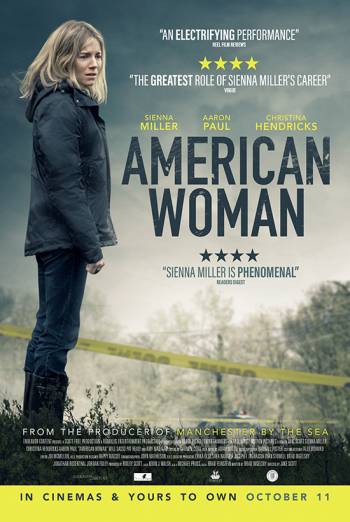 When a Pennsylvanian woman’s daughter goes missing, she’s tasked with raising her now-motherless infant granddaughter. But even as the years pass, the troubling questions around the disappearance never seem to go away. Sienna Miller, Christina Hendricks and Aaron Paul star in this drama.

Heading out one evening with long-term, on-off boyfriend Tyler (Alex Neustaedter), teenage Bridget leaves her young son with her mother, Debra, for the evening. Tired of constantly being treated as a personal babysitter, Debra becomes frustrated when her daughter is out later than expected. But as the hours turn to days, she becomes terrified about what might have happened to her lost daughter.

Tearfully desperate for good news and some clue about the whereabouts of Bridget, Debra feels helpless in the investigation. As time slowly passes, Debra struggles through several failed relationships, all while raising her now adolescent (Aidan Fiske) grandson.

With no word about her daughter’s fate for years, Debra does all she can to remain resilient, desperate in her hope that Bridget might still be out there. Somewhere, anywhere. Could things be about to change?

Sienna Miller (American Sniper, The Lost City of Z, Layer Cake) is tipped as giving the performance of her career opposite Christina Hendricks (Mad Men, Egg, Crooked House) and Aaron Paul (Breaking Bad, A Long Way Down, Need For Speed). This dramatic feature is produced and directed by father and son Ridley (The Martian, Alien: Covenant, Gladiator) and Jake Scott (Welcome to the Rileys, Plunkett and Macleane) respectively.