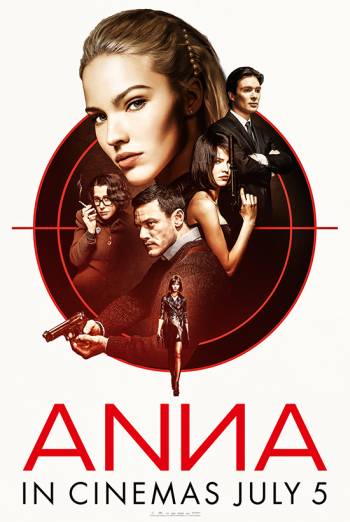 Anna is a former model turned one of the world’s most skilled and feared government assassins. The authorities can’t catch her. Her enemies can’t stop her. So, what could possibly stand in her way? Sasha Luss leads a star-studded cast that includes Academy Award winner Helen Mirren, and Cillian Murphy. BAFTA-nominated Luc Besson writes and directs this action thriller.

How does Anna Poliatova (Sasha Luss), a former Moscow-based model, go from casting calls, to becoming a socialite rubbing shoulders with the elite, to getting mixed up in an assassination at a hotel? That’s what investigator Lenny Miller (Cillian Murphy), tasked with solving how an entire room of men met their end, would like the know.

The truth is, this strikingly beautiful witness is one of the world's most feared government assassins. And she has the strength, skill, and speed to kill anyone at any time. In fact, whether she’s kicking ass through a military-protected compound, or seducing and disposing of high-profile targets, no one has been able to stop her.

Dispatched to Paris by her government handler, Olga (Helen Mirren), she has a seemingly simple objective: assassinate someone. But with no back-up should things get out of hand, could everything come crashing down? Finding out is going to involve breath-taking gun battles, eye-popping combat, and looks that kill.