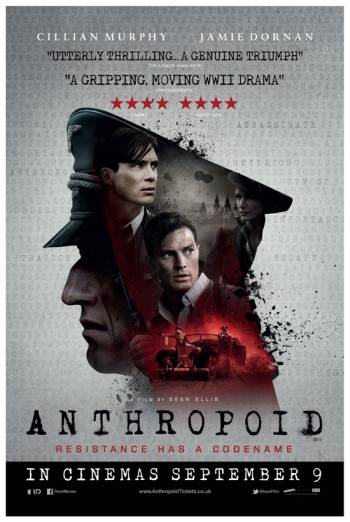 Based on the extraordinary true story of Operation Anthropoid, the World War II mission to assassinate SS General Reinhard Heydrich.

Prague, 1942. Czechoslovakia is occupied by Nazi soldiers in the middle of a war that is slowly causing Europe to crumble from the inside out.

The twisted regime has spread across the continent, wrapping its poisonous fingers around vulnerable countries, breeding fear, hatred and death.

Two men will risk their lives to trigger what they hope will be the beginning of the end of it all.

Josef Gabčík (Cillian Murphy) and Jan Kubi (Jamie Dornan) have escaped the clutches of the Nazis, fleeing their country before the Germans took over.

And now they’re going back.

They plan to assassinate the regime’s third in command, Reinhard Heydrich – the SS officer who introduced the Final Solution. But obliterating one of the most evil minds in the world is no easy task.

First, they must integrate into Nazi society and try to fit into a world that is built on a foundation of suspicion and punishment.

Twin sparks in a pile of dynamite, the two men must reconcile with the risk they face and the retribution they so desperately seek.

As the tension mounts and time begins to run out, they must decide if and when to pull the trigger.

Sean Ellis (Cashback) has been nominated for an Academy Award for his work on short films, and he wrote and directed Anthropoid, which is his first feature-length film.

Get all times & tickets
All films at Islington
Also showing