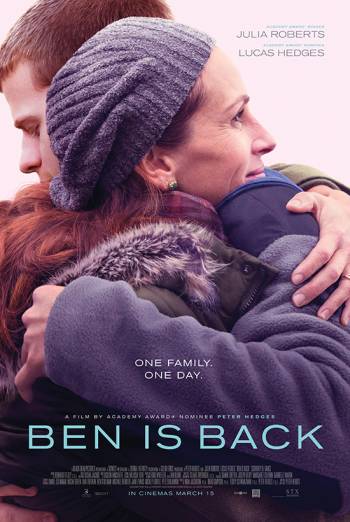 When Holly Burns’s teenage son Ben returns from rehab on Christmas Eve, she welcomes him with open arms, but worries about keeping him sober. Over the 24 hours he spends at home, Holly finds out new truths about secret events that threaten to shatter the whole family. Julia Roberts, Lucas Hedges, Courtney B. Vance, and Kathryn Newton star in this drama about the power of a mother’s love for her son.

When 19-year-old drug addict Ben Burns turns up at his family’s household on Christmas Eve, his mother Holly Burns (Julia Roberts) is overjoyed to see him – and instantly concerned that he’s out of rehab early.

They come to an agreement. He must return to rehab, but may remain at home for 24 hours – as long as he promises to stay within her sight.

But it’s not long before old acquaintances resurface, threatening to pull Ben back into the dark world he’s been working so hard to escape.

When a local gang discovers that Ben has returned, they threaten him, insisting he tie up the loose ends he left behind… Things quickly spiral out of control, and Holly begins to lose her grasp on Ben.

The truth about Ben’s criminal past rises to the surface and begins to tear the whole family apart. Desperate to try to repair the damage and keep her son safe, Holly does everything she can to keep Ben from drifting back into his dangerous life.
But while Ben is back, it may be too late to save the Ben that she loves…

Julia Roberts (Homecoming, Mother’s Day, August: Osage County), Lucas Hedges (Three Billboards Outside Ebbing, Missouri, Manchester By The Sea), Courtney B. Vance (Isle of Dogs, Office Christmas Party, Terminator Genisys), and Kathryn Newton (Three Billboards Outside Ebbing, Missouri) star in this moving family drama directed by Peter Hedges (The Odd Life of Timothy Green), which looks at how much a mother would endure to save her son.