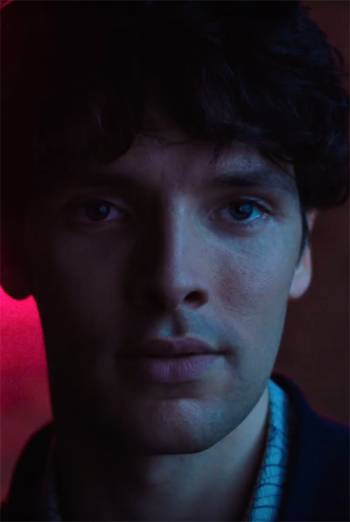 Benjamin loves creating films, but with his second feature due to be released soon, he is plagued with doubt about his work and personal life. And when romance blossoms, the rising filmmaker is thrown into further emotional turmoil... Anna Chancellor, Colin Morgan, Phenix Brossard, and Joel Fry star in this beautiful comedy.

After the release of his successful first feature quite some time ago, filmmaker Benjamin (Colin Morgan) has finally got around to completing his second – No Self. On the brink of its premier, Benjamin is plagued by doubt over the film’s quality, which is only compounded by his personal feelings of unhappiness and loneliness.

However, when at a gig with his friend, Stephen (Joel Fry), he begins to admire the mesmeric and interesting French musician on stage, Noah (Phenix Brossard). After speaking at the show, the pair spend time together and begin an affair.

The more time they spend together, the more they enjoy each other’s company, and Benjamin begins to feel better in himself as the romance intensifies. But he is still plagued by the painful self-doubt that has set him back his entire life – despite enjoying the time spent with Noah, he still can’t escape the nagging feeling that his inability to love will one day lead to intense hurt…