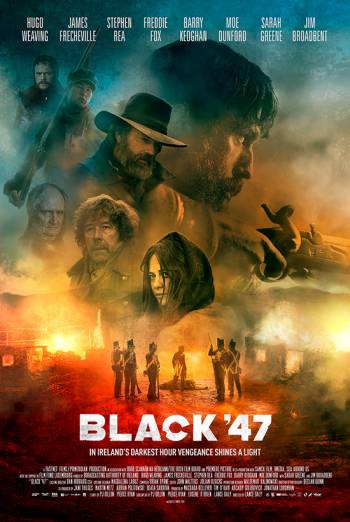 Feeney, an Irish soldier who has been overseas, returns home to find that his country is locked in the grip of a horrible famine and everyone he loves has died. Convinced that the English are to blame and with nothing left to lose, he sets out on a warpath for revenge in this bloody action thriller starring James Frecheville, Hugo Weaving, and Jim Broadbent.

Ireland, 1847. For two years, the country has suffered through a bitter famine, which has twisted the Emerald Isle into a bleak, dark, desperate wasteland.

Though he has missed the worst of The Great Hunger, Feeney (James Frecheville) an Irish Ranger, has seen his fair share of death and pain while serving the British Army overseas. Desperate to be with his family again, he abandons his position and returns to Ireland.

But what he finds is even more horrific than he could have imagined.

His mother has perished, and his brother has been slaughtered by British soldiers. With his country in ruins and his family destroyed, Feeney only has one thing left to keep him going – a bloodthirsty desire for revenge.

“The English cannot be forgiven.”

A skilled soldier with a knack for getting his man, Feeney has all the tools he needs. And his targets? The aristocrats and politicians who sit high upon the social ladder while the peasants waste away.

One by one, Feeney picks off the wealthy and gluttonous, spreading a thundercloud of fear over the streets. The elite shake, terrified, inside their homes. It’s clear that Feeney must be stopped.

Hannah (Hugo Weaving) is the only one who knows what Feeney is truly capable of – and therefore the only one who may be able to stop him. A British soldier and former friend who served alongside him, he’s sent to track Feeney down and end his bloody rampage.

As the men’s paths are drawn closer together, they’ll inevitably come face to face, with their morals and responsibilities hanging in the balance.