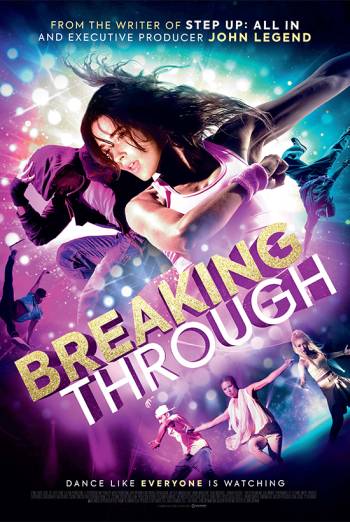 Can an average girl with big dreams become something sensational, breaking the low expectations of her small-town life? Her exceptional talent for dancing could be the answer… Breaking Through is a fun dance film featuring John Legend as Executive Producer and starring Sophia Aguiar and Robert Roldan.

Casey (Sophie Aguiar) lives a strictly average life. Stuck in a dead-end neighbourhood and an uninspiring job, Casey can’t help but to dream of something more… Even if her background would suggest she’s destined for mediocrity.

Luckily, Casey doesn’t just have a dream: she has talent, too. An exceptional dancer, Casey daydreams about becoming a superstar in the world of dance, but struggles to see how she could ever break in without connections. Luckily, a friend has an idea: set up a YouTube channel of dance tutorials, showing off her talents.

Her subscriber count quickly mounts up, with hundreds of thousands of views with every new release. Soon, Casey is propelled into the world she’d always dreamed of joining, rubbing shoulders with celebrities and even appearing on TV. But can Casey remember where she came from now that she’s part of the elite? And can she learn who to trust now that she’s famous?