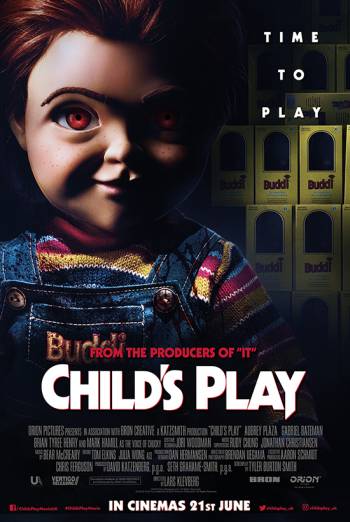 When a young boy moves to a new city, his mother gives him a special present to lift his mood. However, the seemingly innocent Buddi doll is anything but, as it reveals its evil nature and murderous streak. Aubrey Plaza, Mark Hamill, and Gabriel Bateman star in this horror based on the 1988 film of the same name.

Moving to a new city is always tough, especially for lonely 13-year-old Andy Barclay (Gabriel Bateman). Struggling to adapt to the move, his mother, Karen (Aubrey Plaza), gifts him a brand-new hi-tech Buddi toy doll for his birthday, which he names Chucky (Mark Hamill).

But Chucky isn’t as innocent as he first appears. Andy is terrified when his doll takes on a life of its own and reveals a murderous and sinister nature.

As Chucky grows more powerful, he begins to control other online Buddi products, and his attacks become more gruesome and horrific. Struggling to convince the authorities and his mother of the reality of the bloodthirsty toy, Andy and his friends must take it upon themselves to end Chucky’s violence.

Chucky is back in Child’s Play, as director Lars Klevberg (Polaroid, The Wall) is joined by It producers David Katzenberg and Seth Grahame-Smith. This horror is based on the 1988 slasher of the same name and stars Aubrey Plaza (Legion, An Evening with Beverly Luff Linn, Ingrid Goes West), Mark Hamill (Con Man, Star Wars: The Last Jedi), and Gabriel Bateman (Benji, Lights Out, Checkmate).