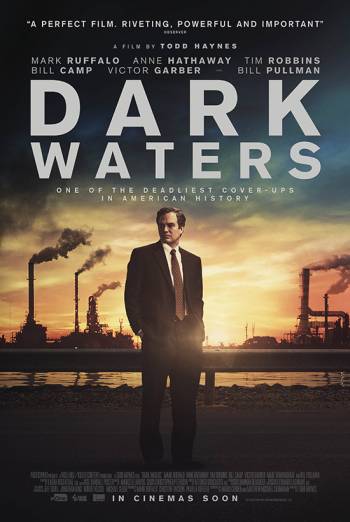 When a determined attorney discovers the truth behind a series of unexplained deaths spanning decades, he risks everything to bring those responsible to justice. Based on a true story, this powerful drama stars Anne Hathaway, Mark Ruffalo and Tim Robbins.

Robert Bilott (Mark Ruffalo) is a big shot corporate defence attorney in Cincinnati, used to making his money fighting in court for multimillion-dollar chemical companies. But when he visits his grandmother’s rural community, something grabs Robert’s attention that makes him consider switching his allegiance.

Introduced to a farmer friend of his grandmother, he learns the gentleman’s (Bill Camp) cows are dying on mass, claimed to be as a result of poisoned drinking water. Robert does some digging and realises there might be some merit behind the extraordinary claims, which he confesses to his wife (Anne Hathaway).

Unearthing a series of shocking images and documents, Robert begins to suspect the problem might stretch further than a herd of cattle, as he realises the entire town could have been unwittingly ingesting lethal chemicals for decades, with goliath conglomerate DuPont at the centre of the secret scandal.

But as the case progresses, and more sinister clues come to light, Robert learns the entire legal system might be rigged and that the chemical company’s influence stretches further than he realised. To bring them down, he must risk his family, his future and his whole life.