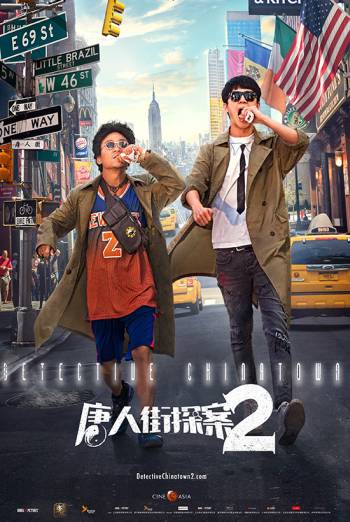 A comedy-thriller sequel to ‘Detective Chinatown’, in which a detective duo try to solve the murder of a dying man's grandson.

When detective Tang Ren (Wang Baoqiang) hears of a world detective contest offering a significant cash reward, he lures his sidekick, Quin Feng (Liu Haoran), into joining him in the challenge by inviting him over to New York for his “wedding”. Qin Feng clocks he’s been fooled when they arrive at the luxurious “wedding venue”, which turns out to be the home of Uncle Seven – the famed godfather of Chinatown.

Uncle Seven has set those competing in the world detective contest a highly important mission: find out who has murdered his grandson. The reward for solving the murder? £5 million. But the clock is ticking, as Uncle Seven only has a few days left to live. Will the duo be able to hunt down the cold-blooded killer and secure the victory in time?

Detective Chinatown 2 is the sequel to the 2015 film, Detective Chinatown, and is written and directed by Chen Sicheng once again. A thrilling action-comedy packed with humour, the film sees Wang Baoqiang (Blind Shaft) and Liu Haoran (Buddies in India) reprise their comedic roles as Tang Ren and Qin Fen, respectively.

Get all times & tickets
All films at Livingston
Also showing