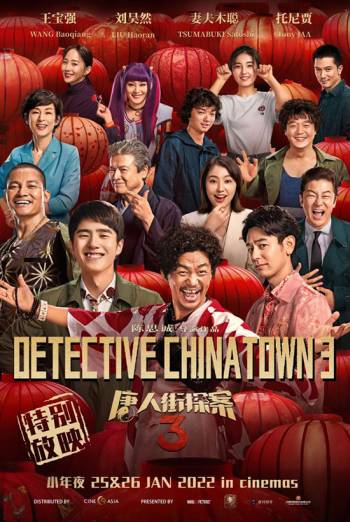 China’s most famous detective duo is back and this time the pair heads to Tokyo to try and solve a murder. But they aren’t the only detectives working the case. The pair must compete against other investigators in challenges set out for them by mysterious high-profile detective ‘Q’. A hilarious action-comedy directed and co-written by Chen Sicheng. The cast includes Wang Baoqiang, Masami Nagasawa, Liu Haoran and Tony Jaa.

When a prolific murder takes place in Tokyo, Chinatown’s top detectives Tang Ren (Wang Baoqiang) and Qin Feng (Liu Haoran) take up the challenge of solving the crime and tracking down the culprit.

But they are not the only investigators working on the case. The detective duo must compete against each other as well as other agents registered on the CRIMASTER World Famous Detectives list. The current top-ranking member, ‘Q’, sets the detectives a series of difficult challenges resulting in comical escapades, including a run-in with a sumo wrestler, riding the streets of Tokyo in go-karts, and calamitous mass brawls.