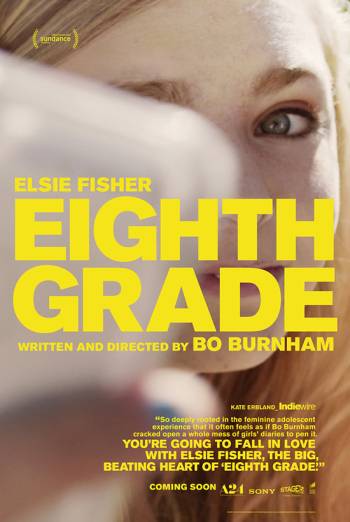 Kayla is living the dream…or so her YouTube channel would have you think. In fact, she struggles with anxiety, making friends, and forming relationships. Directed by Bo Burnham, Eighth Grade follows the emotional rollercoaster of a middle schooler battling the problems of 21st century adolescence, starring Elsie Fisher, Emily Robinson, and Josh Hamilton.

Kayla Day (Elsie Fisher) runs a YouTube channel offering motivational advice about confidence and self-image, and to all intents and purposes, she has her life together. But off screen, she’s an anxious eighth grader, awkwardly ambling through the final days of her middle school years.

Finding it difficult to make friends, Kayla relies heavily on social media for gratification and struggles to communicate with her dad, who is constantly trying to break down her barriers.

Over the last few days of her middle school life, Kayla goes through various ups and downs as she tries to find her voice and make a lasting impression on her classmates. Slowly building up a confidence, Kayla makes friends with a group of 12th graders – but things turn sour, leaving Kayla feeling even worse than before…

In his feature film directorial debut, Bo Burnham explores contemporary issues through comedy and drama. Starring Elise Fisher (Despicable Me), Emily Robinson (Virgin Territory) and Josh Hamilton (13 Reasons Why), Eighth Grade has received critical acclaim and certainly one not to be missed.