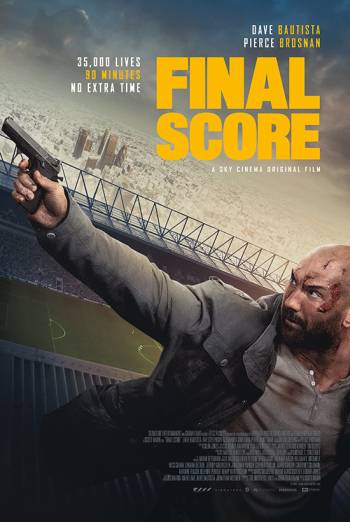 When an entire football stadium full of fans is on the brink of being blown to pieces, it’s up to ex-soldier Michael Knox to find the infiltrators and bring them to justice. But the clock is running down. Will he be able to stop them before the final whistle? From the director who brought us Heist, starring Pierce Brosnan, Dave Buatista, and Ray Stevenson.

It’s meant to be a nice evening out at the football for Michael Knox (Dave Bautista), his niece, and 35,000 other fans watching the West Ham game.

But, for Michael, nothing is ever simple.

When the lights suddenly go off, a brief panic sweeps through the stadium. After a few moments, normalcy resumes and everyone assumes it must have been a power failure. Nothing to worry about. And then Michael’s mobile rings…

A thick Eastern European accent growls down the line with a set of instructions: there’s a man called Dimitri (Pierce Brosnan) somewhere in the stadium. Michael must locate him and turn him over, or the entire building will be blown to pieces – along with everyone inside it.

And, just to make sure Michael takes them seriously, they’ve taken his niece hostage.

Up against a gang of hardened criminals, with everything that matters to him on the line, it might seem like Michael is on the back foot. But as an ex-soldier with years of military experience, it turns out he’s more than ready to play ball…

What comes next is a deadly game of cat and mouse, through the corridors and back rooms of the stadium, with 35,000 lives on the line.