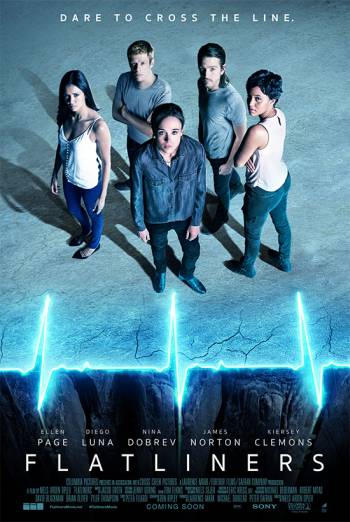 In the sequel to the 1990s hit horror film, a group of students begin to experiment with the lines between life and death, trying to spur some sort of reaction - but things quickly spiral out of control.

To Courtney (Ellen Page), there’s nothing more miraculous than the gateway between life and death. A medical student, she’s dedicated her life to studying the human body and devising little miracles to defy that delicate boundary.

But what happens when a passion turns into an obsession?

For all her efforts, Courtney can’t find the answers she’s looking for. She decides to conduct an experiment that will track what happens to our brains when we die. And she’s going to run the tests on herself.

In the hospital basement, in the middle of the night, she convinces her classmate, Jamie (James Norton), to kill her and bring her back to life. Dead for a full minute, what she experiences is beyond comprehension. She wakes up with new, unexplainable abilities and a fresh vivacity for the world. So much so, that her classmates want in on the action.

They continue to experiment, killing each other for two, five, seven minutes… And revelling in the euphoria that comes when you’ve touched death and walked away.

But soon, the students begin see and experience incomprehensible things. It seems that the dead have followed them back, and they’re determined not to let them escape so easily.

Kiefer Sutherland, who enjoyed success with cult 80’s vampire flick, Lost Boys (1987) and then the smash series 24 (2001-2010), reprises his role as Nelson from the original movie.