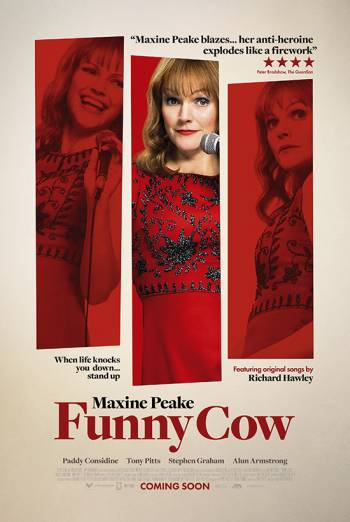 They say the comedy circuit of 1970s Northern England is no place for a woman – which is exactly why Funny Cow (Maxine Peake) is determined to make her mark.

It’s no secret that stand-up comedy is tough – and the stages of clubs and pubs in 1970s working class Britain are some of the most unforgiving of them all. Especially if you’re a woman.

But one female comedian is determined to make her mark. Funny Cow (Maxine Peake) is a born fighter, and she’s prepared to take her grit to the spotlight if it means she’ll make a few people laugh.

There’s nothing light-hearted about Funny Cow’s past. Abusive relationships have plagued her throughout her life. She grew up with a violent father (Stephen Graham) and married Bob (Tony Pitts), her perpetually angry husband. But worst of all, she hurts herself by neglecting her dreams and desires.

Until she sees a stand-up routine by Lenny (Alun Armstrong), a cynical and exhausted local comedian, which triggers something inside her – she needs to be on stage.

Fuelled by rage, frustration, and a knack for making people laugh, Funny Cow tries to break into Northern England’s comedy world. She’s met with hostility at every turn, but a small part within her knows that it’s what she was born to do. She pushes on, baring her soul on stage in a raw, honest, and hilarious way, until people finally begin to take notice.

Directed by Adrian Shergold (Mad Dogs), acclaimed TV, stage, and film actress Maxine Peake (The Theory of Everything) stars as the brilliant and tragic Funny Cow in this British drama. An artistic love letter to British comedy, Funny Cow features a series of cameos by the likes of Jim Moir, John Bishop, Kevin Eldon, and Diane Morgan.