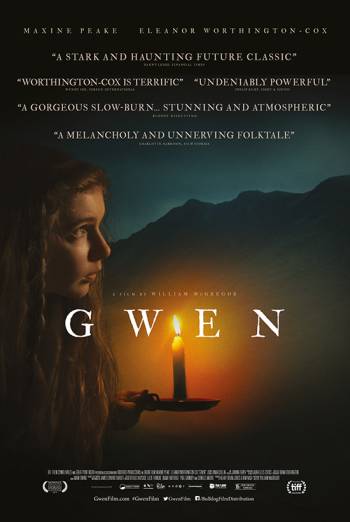 With her father having gone to war, teenage Gwen, her mother Elen, and her younger sister Mari try to keep their small farm in the hills of Snowdonia running. Yet, Elen is dealing with a difficult medical condition, and a greedy mining company with its eyes on the family’s land is willing to use vicious means to take the farm. Eleanor Worthington-Cox, Maxine Peake, Kobna Holdbrook-Smith, and Jodie Innes star in this dark drama set in 19th century Wales, directed by William McGregor.

The father of the family is away at war, and Elen is struggling with a mysterious, worsening illness, with the females depending on the kindness of a local doctor (Kobna Holdbrook-Smith) to provide free medicine for Elen’s condition. All the while, the industrial revolution is motoring on, and a mining company is after the family’s farm.

Elen stands up to the mining company, keeping her grasp on the land. Yet, the miner owners get continually more violent in their determination to take it for their own. As dark events swirl around the family, can they endure? Can they survive?

Eleanor Worthington-Cox (Maleficent, Britannia) stars in this dark period drama, alongside Maxine Peake (The Theory of Everything, Peterloo), Kobna Holdbrook-Smith (Mary Poppins Returns, Paddington 2, Justice League), and newcomer Jodie Innes. William McGregor (Poldark, The Missing) directs this story of a family of women desperately fighting against the forces that threaten them.