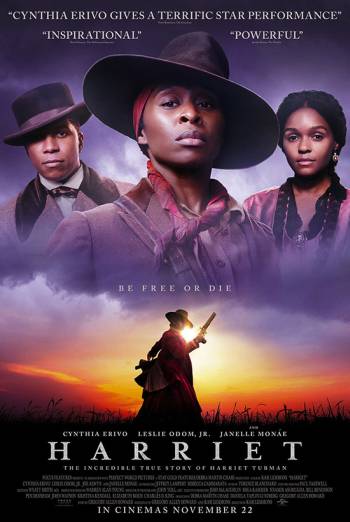 Based on true events, this moving drama follows Harriet Tubman in the days before she became the heroic freedom fighter history remembers her as. Escaping from slavery, Harriet won’t rest until her family and others like them are free – no matter the danger. Kasi Lemmons directs this gripping retelling, with Cynthia Erivo taking on the lead role, starring alongside Leslie Odom Jr. and Janelle Monáe.

Harriet Tubman (Cynthia Erivo) lives as a slave, answering to her harsh masters, the Brodess family. One day deciding enough is enough, Harriet makes a dash for freedom. Facing near-certain capture and a return to a life in servitude, she leaps into a dangerous fast-moving river – resolving that she’d rather be dead than a slave.

Miraculously, she survives the drop and, against all odds, follows the light of the North Star and the direction of the river to freedom in Pennsylvania. Seeking shelter, she moves into a boarding house owned by entrepreneur Marie Buchanon (Janelle Monáe) and joins an organisation for escaped slaves run by William Still (Leslie Odom Jr.).

Yet, Harriet can’t rest easy until her family are free too. Going against the misgivings of William, she determines to rescue them. Before long, she finds herself on a series of missions to guide more people to freedom. Does she have the nerve and cunning to emancipate other slaves and stand up to the owners?