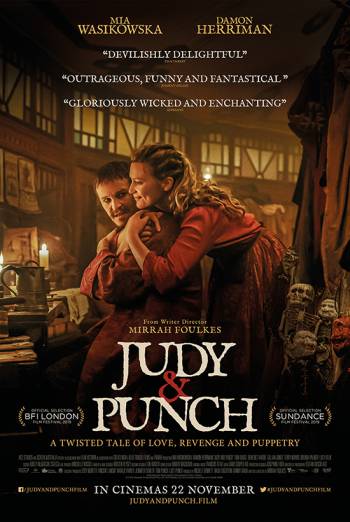 In the unusual town of Seaside, a pair of puppeteers play host to a popular marionette show. But after a series of horrific events turn the relationship sour, they find themselves pitted against each other. This brilliantly unique adaptation stars Mia Wasikowska, Damon Herriman and Benedict Hardie.

In the outlandish town of Seaside, located nowhere near the coast, famous puppeteers Judy (Mia Wasikowska) and Punch (Damon Herriman) are trying to resurrect their once popular marionette show.

But while Punch takes the plaudits for the great puppetry, it’s Judy who pulls the strings, both behind the scenes and in their relationship. As she works tirelessly, he spends much of his time drinking instead.

One day, though, their strained relationship hits an irreparable snag as the unforgivable Punch neglects their infant child to the dismay of his wife. Confronting her partner, the distraught Judy falls victim to Punch’s infamous drunken rage. Suffering the wrath of her abusive husband she’s taken to the nearby woodland and left to die.

But Judy is resilient. Discovered by the forest folk, she’s nursed back to health. Despite being safe from her deplorable husband, Judy is plagued by thoughts of retribution, leading her to head out on a mission to seek a terrible revenge.

Starring Mia Wasikowska (Alice in Wonderland, Stoker, Crimson Peak), Damon Herriman (The Nightingale, Down Under, The Little Death) and Benedict Hardie (The Light Between Oceans, Upgrade, Secret City), this gripping Australian drama brings the classic puppet-show characters to life like nothing else.