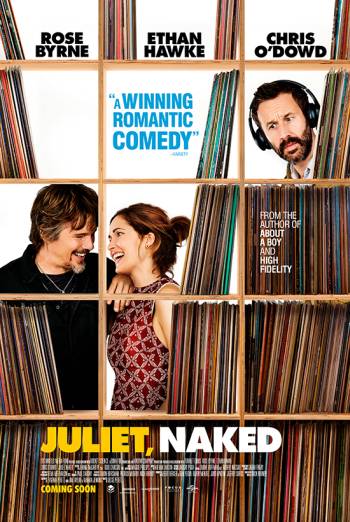 Annie (Rose Byrne) is a polite English woman who wears sensible cardigans, keeps her house tidy, and hosts dinner parties in her kitchen. She’s beginning to worry she’s wasted the last 15 years of her life.

She and her partner, Duncan (Chris O’Dowd), are growing apart. Rather than moving forward with his own life, Duncan spends his days obsessing over indie musician Tucker Crowe (Ethan Hawke).

Duncan is convinced that Tucker, an American singer-songwriter who hasn’t released anything in twenty years, is the true God of the music industry. Basically, he worships him. When new material from Tucker unexpectedly resurfaces, it blows Duncan’s mind – and shatters Annie’s patience.

Tired of being with someone who pays more attention to an obscure musician he’s never met than he does to his own girlfriend, Annie posts a scathing review of the album. Her words send her relationship into turmoil – and not only because Duncan is so offended.

Tucker responds directly to her critique, and he and Annie begin talking online. At first, it’s just casual banter. But as the messages fire back and forth, it turns out they have a connection that transcends music, fame, and the Atlantic Ocean.

When Tucker announces he’s coming to London, it rocks Annie’s world – will she risk the comfort of her quiet life to give the impossible a chance?

Based on Nick Hornby’s bestselling novel, Juliet, Naked is directed by Jesse Peretz, who has worked on hit TV comedies including Girls and Orange is the New Black. Rose Byrne (Bad Neighbours 2) stars as Annie, alongside Chris O’Dowd (Molly’s Game) as her disinterested boyfriend, and Ethan Hawke (First Reformed) as the musician who throws everything into question.