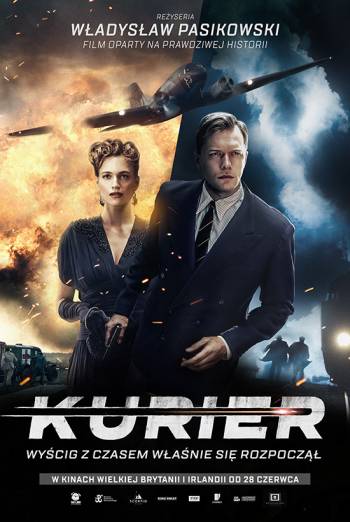 During Nazi occupation in Poland, the courage of one man will be put to the test as he tries to bring those exiled together in uprising. Brought to us by Wladyslaw Pasikowski, this dramatic war thriller stars Julie Engelbrecht, Philippe Tlokinski, and Bradley James.

Set in the early 1940s, following the German invasion of Poland, many Poles are left feeling isolated under Nazi occupation with war on their doorstep. As contempt sweeps the country, factions begin to form, with Polish diplomat Jan Nowak-Jeziorański (Philippe Tlokinski) working between the Home Army and the exiled Polish government.

Serving as a messenger, the Pole’s job is to communicate with both sides of the conversation, precariously responsible for the discussions between the two powers.

However, in secret, the courier is part of an underground rebellion movement who support the exiled government.

Taking advantage of his official diplomatic position, Jan travels to London on a covert mission with the hope of gathering British support of the Polish cause, as he explains the desperate situation in Eastern Europe.

Moving secretly between his home of Warsaw and the rest of Europe to spread political propaganda, the courageous courier must do all he can to evade capture if he’s to see out the rest of the war…