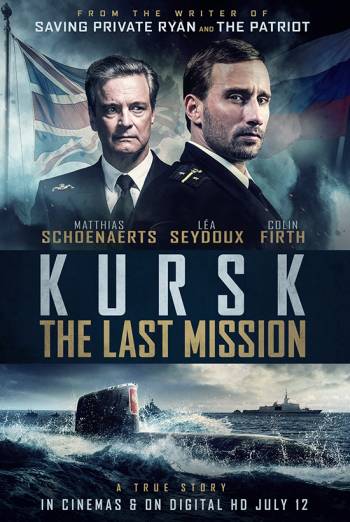 When a horrific accident hits a nuclear-powered Russian submarine, its crew must fight to survive. But as conditions worsen deep below the surface, the men can only pray to be rescued before it’s too late. Based on the true story of the 2000 Kursk submarine incident, this harrowing tale stars Lea Seydoux, Matthias Schoenaerts, and Colin Firth.

As the Russian navy prepares for its first large exercise in over a decade, it launches the Kursk into the northern seas of the Arctic Ocean, with 118 men on board.

But as crashing explosions rock the nuclear-powered vessel, disaster strikes and many of the crew perish, with officer Mikhail Kalekov (Matthias Schoenaerts) among the surviving few.

With the clock running down by the minute and air getting low on the sinking craft, the suffering crew members can only wait for a swift rescue.

However, complications arise above the surface with political gameplaying taking hold. Despite the desperate insistence of help from British navy chief David Russell (Colin Firth), all foreign aid is refused.

As time runs out for the sunken sailors, a decision needs to be made. But with oxygen quickly depleting on the submarine, will any attempt to save the men’s lives be too late?