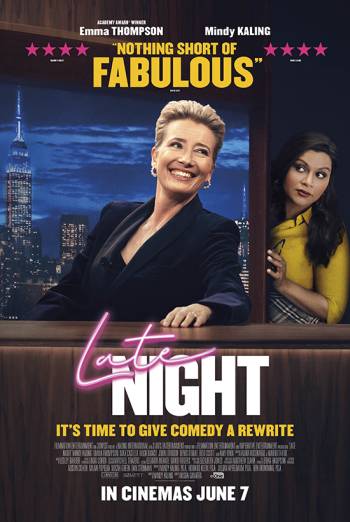 When a late night talk show host learns that she’s being replaced due to low ratings, she makes an impulsive hire that could change the landscape of her show completely… Mindy Kaling writes and stars in this dramatic comedy, and is joined by Emma Thompson, John Lithgow, and Ike Barinholtz.

Legendary talk show host Katherine Newbury (Emma Thompson) has been a pioneering presence in television for years, but her tenure is dwindling and she’s on the verge of losing her show if she doesn’t do anything about her ratings.

In a last ditch effort to up her image and dilute her all-male staff, Katherine hires a new, young writer – Molly (Mindy Kaling). Originally hired on to the writing team, Molly proves to actually be a handy acquisition who could save the show. She’s good at her job and determined to excel, with new ideas, fresh writing, and contagious enthusiasm.

Despite the generation and culture gap, the two women work well together, and the show is benefiting – but with a clock ticking on the program, it could be too little too late…