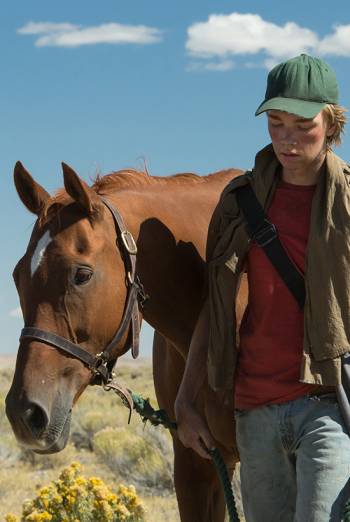 In the latest film from acclaimed director Andrew Haigh, a lonely teenage boy recues an ageing racehorse and the two embark on a journey across America in an attempt to reach a place that finally feels like home.

Portland, Oregon was supposed to be the fresh start that Charley (Charlie Plummer) and his dad Ray (Travis Fimmel) would use to turn things around. But, just like every other time they’ve moved, it’s not the case.

Ray falls back into his old ways, leaving Charley feeling listless and alone. That is, until he meets Del (Steve Buscemi), a horse trainer, and Bonnie (Chloë Sevigny), a jockey. Charley discovers he has a knack with animals and lands himself a job at the local racetrack.

Which is where he becomes best friends with Lean on Pete, a racehorse that takes a liking to the boy.

The thrill of the racing lifestyle helps to lift Charley out of his desolate existence – until he learns that Pete is too old to compete and is destined for the slaughterhouse.
Unable to convince Del to spare the horse, Charley decides to take the reins. He steals Pete and sets out on a journey across the wide open spaces of America towards Wyoming where he thinks he might find his last trace of family.

As the boy and his horse make their way eastwards, they experience struggles and meet like-minded misfits who help Charley figure out what it truly means to be ‘home’.

Acclaimed filmmaker Andrew Haigh (45 Years, The Weekend) directs this moving drama about family, loss, and friendship. Charlie Plummer (All the Money in the World) won the Venice Film Festival’s Best Young Actor or Actress award for his portrayal of Charley, and stars alongside Chloë Sevigny (The Snowman) and Steve Buscemi (The Death of Stalin, Boardwalk Empire).