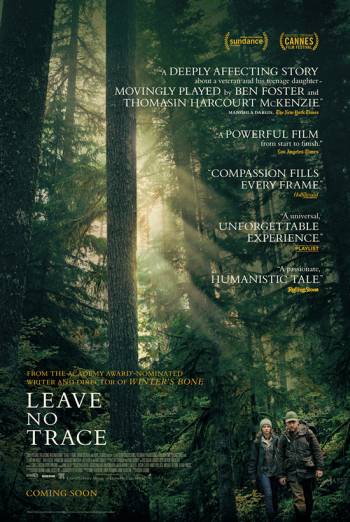 A man and his daughter are dragged out of the woods and into mainstream life, in this quietly told yet thunderously moving drama about family, trauma, and learning to cope. Directed by Debra Granik, the highly acclaimed talent behind Winter’s Bone, it features Ben Foster and Tomasin McKenzie as the father-daughter duo.

Will (Ben Foster) is plagued by demons that stem from his traumatic time in the military. Bitterly angry with the way society has failed him, he’s turned his back on the modern world and decided to find a drastically alternative way of living.

He and his teenage daughter, Tom (Tomasin McKenzie), live deep in the forests of Portland, Oregon, hidden in the depths of an expansive public park. They survive mainly off the land in a basic yet secure camp that they have built over the years.

Though their life may be simple, Will and Tom are happy. They spend their days maintaining their sanctuary, reading books, and practicing what to do should their camp come under threat.
And then it does.

Despite their best attempts to remain hidden, Will and Tom are discovered and forced to leave their camp behind and return to normal society. Under the watchful eye of social services, they try to integrate into the mainstream and reconcile all the complications of ‘normal’ life.

But they have a backup plan brewing beneath the surface. Will is watching the clock, getting ready for the moment they can flee back to their nomad lifestyle.

When the time comes, will Tom still be willing?

Written and directed by Debra Granik, the acclaimed talent behind Winter’s Bone, Leave No Trace has received high praise from critics and audiences alike, winning awards at the Independent Film Festival of Boston and Heartland Film festival. Ben Foster (Hostiles) stars as the determined father, alongside up-and-coming star Thomasin McKenzie (The Changeover), who plays his devoted yet conflicted daughter.