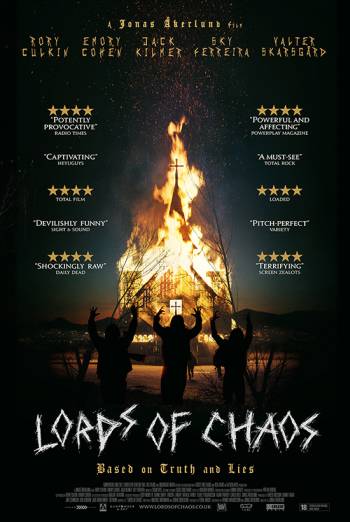 A teenager, who goes by the stage name Euronymous, launches the soon-to-become notorious band called Mayhem. While at the helm of the growth of Norwegian black metal, Euronymous meets a fan named Varg Vikernes - but things begin to take a violent turn… Rory Culkin, Emory Cohen and Jack Kilmer star in this retelling of the brutal true events of Norway’s 80s and 90s black metal scene.

Black metal lands in Norway with the formation of the band Mayhem, led by a teenage guitarist calling himself Euronymous (Rory Culkin). As Mayhem grow in stature, the band is joined by a controversial Swedish vocalist with the stage name Dead (Jack Kilmer), known for his shocking actions on stage.

When on tour, the band meet a fan named Varg Vikernes (Emory Cohen), who Euronymous brushes off at first. But when Varg involves himself more and more with Mayhem, tensions rise and violence takes over, rocking the band.

Things escalate onto the black metal scene with murder and a series of church burnings. At the centre of the brutality is the conflict between Varg and Mayhem – and things are about to take an even more vicious turn…

Rory Culkin (Castle Rock, Scream 4), Jack Kilmer (Woodshock, The Nice Guys) and Emory Cohen (Shot Caller, The Place Beyond the Pines) star in this thriller based on the horrific real-life events surrounding Norwegian black metal in the 80s and 90s. The dramatic retelling is directed by Jonas Åkerlund (Rammstein: Paris, Spun), a former black metal drummer for the Swedish band Bathory.