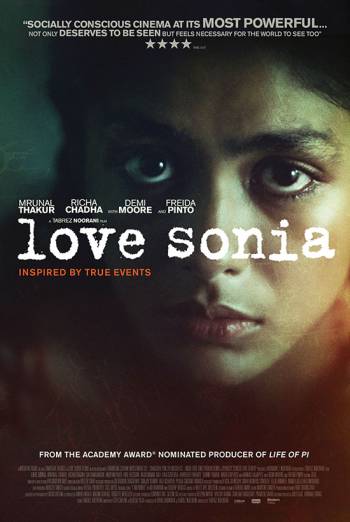 When Sonia’s sister Preeti is sold into an international sex trafficking ring, she is determined to track her down and rescue her. However, Sonia herself becomes entangled in Mumbai’s dark underbelly and must battle to save both her sister and herself. Mrunal Thakur, Riya Sisodiya, Freida Pinto, and Rocha Chadha star in this Tabrez Noorani-directed tale, based on true events of a young girl’s determination to preserve her innocence and her family against all odds.

In an Indian village prone to drought, teenage sisters Sonia (Mrunal Thakur) and Preeti (Riya Sisodiya) live happy and innocent lives. That’s until their debt-ridden father (Adil Hussain) has to sell Preeti to a local landlord.

Desperate to rescue Preeti, Sonia goes out in search of her sister and discovers that she has become entangled in an international sex trafficking ring. It isn’t long before Sonia herself becomes trapped in this underworld too.

As the gritty realities of the dark side of Mumbai threaten to swallow Sonia, she fights to rescue her lost sister and retain her innocence.

This chilling story, based on true events, stars Mrunal Thakur (Kumkum Bhagya) in her international film debut, Freida Pinto (Mowgli: Legend of the Jungle) and Richa Chadha (Fukrey Returns). It’s directed by Tabrez Noorani, known for his work as a producer on box office hits such as Sense8 and The Second Best Exotic Marigold Hotel.