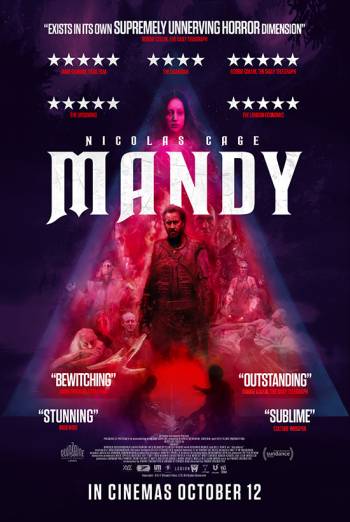 A loved-up couple live a secluded yet peaceful existence in California’s Shadow Mountains. Until one day, a demonic biker gang led by a messiah-like leader (Linus Roache) arrive to turn their world upside down. A gripping horror starring Nicolas Cage, Andrea Riseborough, and Linus Roache.

On her way to work one day, Mandy passes a van occupied by a deviant hippie cult known as Children of the New Dawn. The gang is led by a messiah-like leader (Linus Roache) and after spotting Mandy, orders his disciples to kidnap her.

During the night, they break into the cabin and attempt to torment the couple, drugging them with LSD and tying them up.

Mandy manages to reject their advances, but her actions lead to horrific consequences where she ends up being brutally murdered in front of Red.

Desperate to seek revenge, Red goes on a psychotic rampage, determined to get revenge on everyone who contributed to Mandy’s death.

Mandy is the work of visionary director Panos Cosmatos (Beyond the Black Rainbow) who also co-wrote the action-thriller with Aaron Stewart-Ahn (Be Kind Rewind).

Nicholas Cage (Face/Off) takes the lead in this harrowing action-horror and has received huge praise from critics for his remarkable performance. He is joined by a stronghold of talent including Andrea Riseborough (The Death of Stalin) and Linus Roache (Batman Begins).