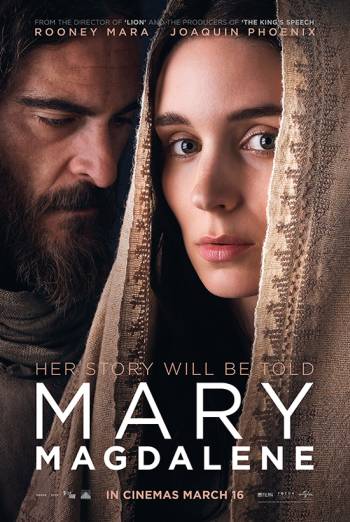 One woman abandons her life of hierarchy and rigidity to join a leader who promises change is coming to the world.

Mary Magdalene (Rooney Mara), feels that there must be a different way of living. One that isn’t strictly structured, with unfair hierarchies and little hope. When she hears about a new social movement, she decides to leave her old life behind to join up and bring about a new world.

Meeting the movement’s leader, Jesus of Nazareth (Joaquin Phoenix), Mary joins his companions and travels the country watching the work of Jesus as he spreads his word to the people. With more of the community joining his cause for change, Mary and Jesus grow ever closer.

Working and following Jesus proves not to always be the easiest or most straight-forward choice; Jesus knows what will be expected of him in the coming weeks and months, but for Mary and those closest to the leader, his fate will be close to impossible to come to terms with.

Mary Magdalene tells the story of one of the New Testament’s most controversial and divisive characters, revealing the woman’s role as Jesus’ follower and believer. Directed by Garth Davis, who directed multi-award winning Lion, Mary Magdalene stars Rooney Mara (Carol, Lion) and Joaquin Phoenix (Her), alongside Chiwetel Ejiofor (12 Years a Slave, The Martian).