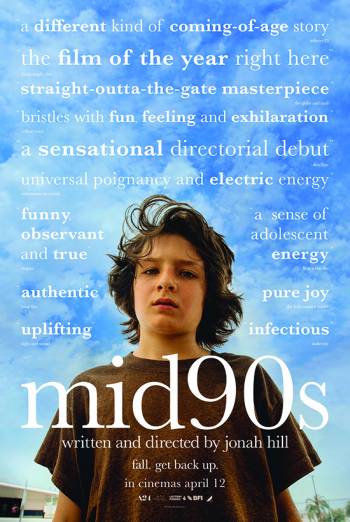 Set sometime within the mid-1990s, Stevie (Sunny Suljic) is a quiet young teen, living in LA with his brother, Ian (Lucas Hedges), and mum, Dabney (Katherine Waterston). When biking through town one day, he spots a skate shop, and is in awe of the spirited camaraderie of the skateboarders hanging around outside.

After managing to get hold of his brother’s skateboard, Stevie decides to return to the shop the next day, where he meets Ruben (Gio Galicia), who introduces him to the other guys.

Despite protests from his mother and brother, Stevie begins to assimilate himself into this new world. He skates dangerously, smokes, drinks, and takes drugs, raising his social standing within the group but losing the respect of his family.

After coming home intoxicated from a night out, Stevie gets into an argument with Ian, leaving him feeling depressed, alone, and alienated.

Rather than turn things around, Stevie pursues his new vices with even more vigour – until one fateful night when the drugs, drinking, and bad decisions lead to a car accident that will change everything forever…

This nostalgic coming-of-age comedy is Jonah Hill’s first feature film, and stars Katherine Waterston (Fantastic Beasts: The Crimes of Grindelwald, Alien: Covenant), Sunny Suljic (The House with a Clock in Its Walls, The Killing of a Sacred Deer), and Lucas Hedges (Boy Erased, Ben is Back).