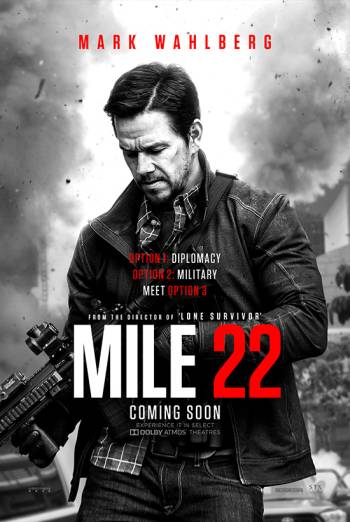 Mark Wahlberg, Lauren Cohan, Iko Uwais, and Ronda Rousey star in this action thriller about a highly secretive CIA unit tasked with transporting a man into the US to prevent a lethal chemical weapons attack.

And the old ways of solving crimes just don’t always work anymore. Which is why Overwatch exists. (Or doesn’t exist, depending on who you ask.)

A highly secret and incredibly sophisticated CIA unit, as far as the rest of the world is concerned they’re ghosts. But Overwatch can become real when it’s most needed. And right now is one of those occasions.

9lbs of radioactive isotope is lethal enough to render six major cities completely uninhabitable – and that’s the exact amount that has gone missing.

Overwatch agent James Silva (Mark Wahlberg) is called in to handle the situation, along with a specialised intelligence team (Lauren Cohan, Ronda Rousey). But it becomes clear that this isn’t a just a case of stolen chemical weapons at large, and they soon suspect something evil is at play.

Li Noor, a mysterious man (Iko Uwais), claims to have information about the theft – but he demands to be able to leave the country and enter the US before he’ll share the details. Local government officials insist he’s just a corrupt cop with a crazy story, but James sees something else and decides to trust him.

As the Overwatch team set out to fulfil the man’s request in exchange for the information, they’re met with violent oppression from a flurry of unknown enemies. Will they be able to deliver the ‘package’ to Mile 22 before it’s too late?