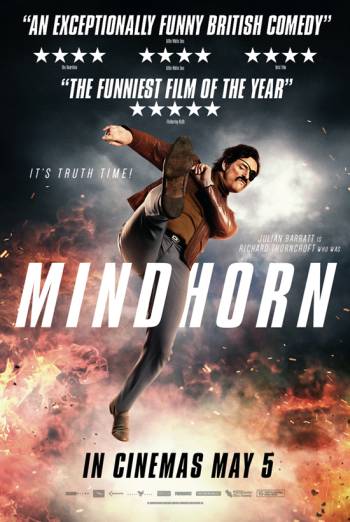 A has-been actor jumps at the chance to reignite his career by negotiating with a serial killer who is obsessed with his former TV show.

Richard Thorncroft (Julian Barratt) shot to fame throughout the Isle of Man in the 80s, playing cyber-detective Mindhorn. Certain that his next step is to take over Hollywood, Thorncroft insults his entire cast, crew and the inhabitants of the Isle of Man during an interview with Terry Wogan.

Jump forward to the present day, and Thorncroft is unemployed, overweight and totally alone. The latest thorn in his side? Being replaced by John Nettles in an advert for orthopaedic socks.

His former co-star and ex-lover Patricia Deville (Essie Davis) has a successful career as a TV journalist, and is married to Thorncroft’s ex-stuntman. A once minor character from the Mindhorn show is currently starring in a hugely successful spin-off to the show, causing Thorncroft to dissolve into a pathetic shadow of his former self.

One day, Thorncroft hears of a demented serial killer terrorising the streets of the Isle of Man. The killer appears unstoppable, until he reveals that he is willing to negotiate – but only with Mindhorn.
Ceasing the opportunity, Thorncroft believes that this is the return he needs to reignite his career, despite the protests and concerns of those around him.

This hilarious, dark and twisted comedy, written and starring Julian Barratt (A Field in England, The Mighty Boosh), alongside fellow co-writer and star Simon Farnaby (Rogue One, Detectorists), will be a huge treat for fans of eclectic comedy.

Starring alongside the writers are Steve Coogan (Alan Patridge: Alpha Papa, The Trip) and Essie Davis (The Babadook, Assassin’s Creed).