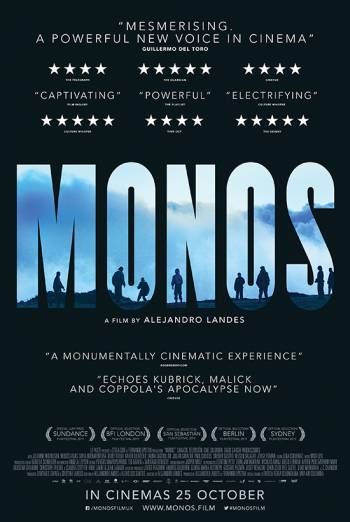 Living deep within the mountains, disconnected from society and surrounded by jungle, a guerrilla army of feral teenagers fights endlessly to survive. Teetering between order and anarchy, can they survive when the balance is upset? This mesmerising thriller stars Sofia Buenaventura, Julianne Nicholson and Moises Arias.

Part of a mysterious wider organisation, the young army only experiences contact with the outside world through a frightening, superior officer known as The Messenger (Wilson Salazar). He has recently charged them with looking after a hostage, referred to as Doctora (Julianne Nicholson), and a milk cow the group names Shakira.

As time goes on, at the orders of The Messenger, the group is forced to leave its mountainous home and journey deep into the thick jungle, keeping the prisoner safe from harm. But as the punishing regime and lawless nature of their society takes its toll, cracks show and the unruly group descends into even greater anarchy.

Described as falling somewhere between Apocalypse Now and Lord of the Flies, this thrilling and mesmerising drama brought us by Alejandro Landes (Porfirio) stars newcomer Sofia Buenaventura, Julianne Nicholson (I, Tonya, Black Mass, Who We Are Now) and Moises Arias (The Kings of Summer, Ben-Hur, The Land).