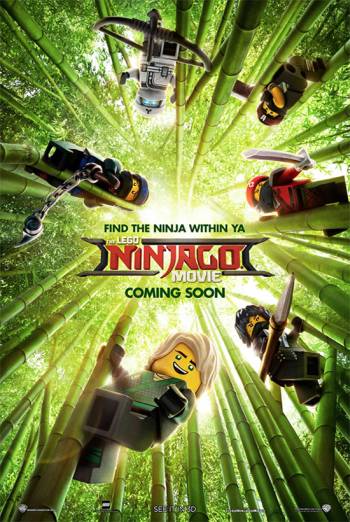 Two brothers – one a wise Sensei, the other an evil warlord – fight against one another, as Sensei Wu’s homeland, Ninjago, comes under threat.

In a story of good ninja vs. bad ninja, the Ninjitsu are about to go head to head, throwing star to throwing star, as two brothers face off.

Sensei Wu (Jackie Chan) seeks to hire six ninjas, who he can train to become true heroes of the night.

The chosen six might be gifted warriors, but they’re also a band of teens struggling with high school life.

Once they are in place, they are frequently tasked with vanquishing evil monsters, while riding around in awesome vehicles.

But a threat much worse than your average monster is lurking in the shadows, about to reveal itself. Hungry warlord, Lord Garmadon (Justin Theroux), plots his revenge on Sensei Wu, his brother.
In a tale of wise Sensei vs. evil warlord, who will come out on top in the battle for Ninjitsu supremacy?

The Lego Ninjago Movie sees the voice-acting talents of Jackie Chan (Kung Fu Panda 3), Dave Franco (Now You See Me 2), Olivia Munn (X-Men: Apocalypse), and other stars turn into Lego form, and is based on the Lego Ninjago toy line and Masters of Spinjitzu animated series.

Charlie Bean directs the latest movie to spawn from the Lego franchise, having worked on a selection of animated movies and TV shows before, including Dexter’s Laboratory and The Powerpuff Girls Movie.

Ninjago is available to watch in stunning 3D at selected Vue Cinemas!