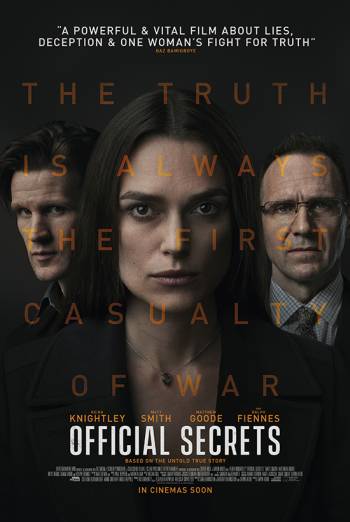 When Katharine Gun comes across a top-secret memo that reveals an illegal plot to trigger conflict in Iraq, she is forced to make the decision to save herself or her country. This dramatic true story stars Keira Knightly, Matt Smith, and Ralph Fiennes, and is brought to us by Academy Award winner Gavin Hood.

Working as a translator at GCHQ in 2003, Katharine Gun (Keira Knightly) comes across government documents every day. Bound by the Official Secrets Act, though, Katharine is forbidden to mention her work to anyone.

One day, however, a sensitive email comes her way – one she can’t just ignore. Revealing an illegal plan by the US and UK to spy on members of the UN Security Council, with a view to blackmailing them into sanctioning war in Iraq, Katharine is faced with a difficult, life-changing decision.

Once deciding to reveal the contents of the email to newspaper journalist Peter Beaumont (Matt Smith), she can’t go back. With the explicit conversation now in the public eye, Katharine’s actions may have helped to save her country, but where does that leave her?

Award-winning director Gavin Hood (Tsotsi, Eye in the Sky) brings us this biographical thriller, telling the true story of Katharine Gun and her mission to reveal a damning truth.