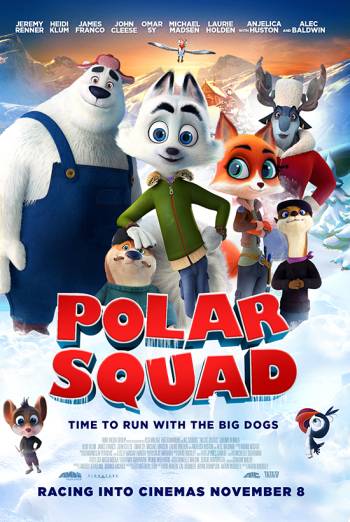 Mailroom fox Swifty has always dreamed of becoming an elite Arctic courier. So, when he comes across a mysterious package destined for a secret location, he decides to take the chance to prove himself. But when he stumbles upon the address, he discovers much more than he bargained for. This animated family comedy stars the voices of Heidi Klum, Jeremy Renner and James Franco.

Arctic fox Swifty (Jeremy Renner) has never truly belonged among his husky friends at the mailroom. No matter how hard he tries, he’s not as strong, fit or fast as the dogs. And yet he’s always dreamed of becoming the world’s greatest delivery dog for the Arctic Blast Delivery Service.

But when a mysterious package crosses his path one day, the feisty fox decides to take his chance. In delivering the parcel, Swifty discovers the address is actually a hidden lair belonging to the nefarious Otto Von Walrus (John Cleese).

Realising the walrus has an evil plan to release an ancient gas upon the land in a bid to melt the thick ice and take over the world, Swifty decides it’s up to him to save the day and finally earn his stripes. But he can’t do it alone. Enlisting the help of his animal friends, polar bear PB (Alec Baldwin), albatross Lemmy (James Franco), red fox Jade (Heidi Klum), otters Leopold (Omar Sy) and Bertha (Heidi Klum), and reindeer Magda (Anjelica Huston), the mismatch team must do all they can to save their home.

Get all times & tickets
All films at Westfield Stratford City
Also showing
BTS Break The Silence: The Movie