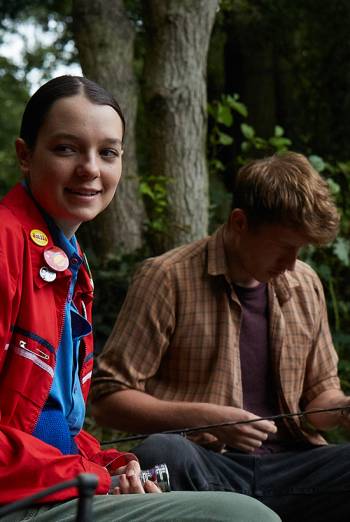 Trevor thinks he has discovered a much-rumoured giant carp in one of the ponds in his quiet mining village near Doncaster. Joined by an eccentric young girl named Pogo, broken-hearted Malcolm, and best friends Shane and David, Trevor leads them on an unforgettable fishing expedition. Tom Varey, Esme Creed-Miles, and Angus Imrie star in this comedy drama, directed by Bill Buckhurst, about post-industrial life in South Yorkshire.

It’s summertime in 1994, and the residents of a quiet mining village near Doncaster are getting on with life and dealing with their own struggles – and with each other. But now there’s a rumour of a giant carp in one of the nearby ponds, and it’s causing quite a stir.

After Trevor (Tom Varey) spends an evening looking for the fabled fish, he decides to band together a group of young friends for an expedition to find it. Joining him are a young misfit named Pogo (Esme Creed-Miles), a boy with a broken heart called Malcolm (Angus Imrie), and two best friends – Shane (Gianlucca Galluci) and David (Ethan Wilkie).

Each member of the group is dealing with their own troubles; could this adventure give them a much-needed moment of escape?

Bill Buckhurst directs his first feature-length film, which stars Tom Varey (Ackley Bridge, No Offence), Esme Creed-Miles (Hanna, Dark River), and Angus Imrie (Fleabag, The Kid Who Would Be King). It’s the story of a group of young people looking for some peace among the difficulties of life in post-industrial South Yorkshire.